Home News The predicament of the Khada Parsi
News
November 20, 2019
0

The predicament of the Khada Parsi

The predicament of the Khada Parsi

In a cheeky comment on Mumbai’s ageing Parsis, a story goes somewhat like this: “If you visit Mumbai’s Parsi General Hospital and require hospitalisation, you are first asked your age. If you are under 60, you are admitted to the children’s ward and those above that, to the adult ward.” A fun-loving community, open to self-deprecating humour, this story has often been related to me by Parsi doctor colleagues.

Over the last few years though, the goings-on at the Parsi General Hospital have been anything but funny. The Bomanji Dinshaw Petit Parsi General Hospital, established back in 1912, is housed in a quaint structure in the innards of South Mumbai neighbourhood of Breach Candy. Unlike many of Mumbai’s community hospitals, which are open to all, this is a hospital built exclusively for Parsis and continues to be so. It seems the institution ran into severe losses partly due to its commitment to charity but also the limited clientele.

In a move to generate income, a part of its premises was to be leased to build a specialty hospital, which in turn would subsidise poor Parsi patients. A Parsi couple based in Hong Kong Parsi had agreed to donate for renovation of the hospital but linked it to allowing the construction of the specialty hospital by the Delhi-based Medanta Group. The Parsi community was divided on this deal. Allegations flew fast, and complaints were lodged mainly alleging lack of transparency. The Hong Kong donors as well as Medanta have now backed out of the project bringing an end to an acrimonious chapter.

The Parsis have made enormous contribution to health care in Mumbai. Besides the philanthropic contribution of families such as Tatas and Wadias towards establishing medical institutions, a lot of well-known doctors have been Zoroastrian. The community has punched well above its weight when it comes its presence in Mumbai’s medical fraternity. Many of them had the opportunity to train abroad and obtain foreign degrees. This may have something to do with their relatively easy access to Western medical education during the British times.

The teaching staff at JJ Hospital, another Parsi gift to the city, was for many years dominated by this community. Till this day the JJ Hospital has an exclusive Parsi ward. Even Mumbai’s only large veterinary hospital at Parel was established by the same Petit family that built the Parsi General Hospital. The imposing ‘Bawa’ wore crisp aprons, spoke chaste English, and generally conducted themselves with a certain gravitas except when they casually used profanities is a memory etched in my mind from my medical school days. 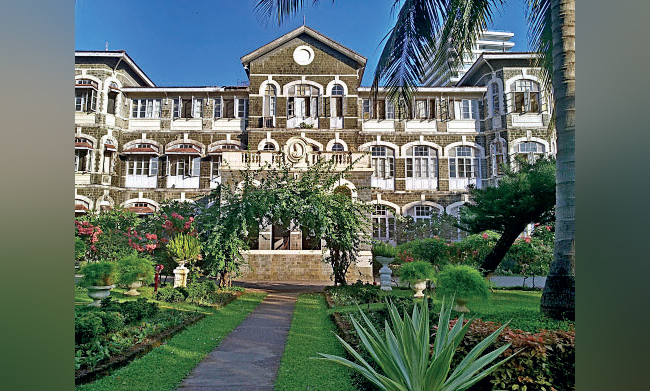 The Bomanji Dinshaw Petit Parsi General Hospital was established in 1912

There are many faith-based and community charitable hospitals in Mumbai. Besides the smaller nursing homes, for many years they were the main form of advanced private health care. They are open to all, perceived as friendly neighbourhood facilities, and fill a crucial gap created by the limited reach of public institutions. Of course, they serve their own communities and favour community doctors for employment. With the rise and popularity of large corporate hospitals, which, though costly are in many ways secular, the smaller community hospitals now face an existential crisis.

They could modernise, invest in technology and move towards super specialty medicine but this often comes at the cost of increasing charges, which in health care is self-defeating. But many of them are doing exactly that. Finally, all these institutions will compete for the same pie of the population, fuelling intense competition with its inevitable malpractices.

In what must be some sort of a global record, south and central Mumbai, with its dwindling population, is currently home to at least 15 large hospitals in a radius of few kilometres, all offering similar facilities.

The predicament of Parsi General Hospital is in some ways like that of the Parsi community; if it must survive and grow, it must change but if it changes substantially, it could lose its uniqueness, identity, its faithful. It’s increasingly clear that the Khada Parsi can no longer afford to stand still.

Sanjay Nagral is a surgeon who, when not wielding the scalpel, wields the pen.

0
0   0
previous Part and Parsi of city
next Parsi Food: All About Its History And Various Mouth-watering Dishes