Diana Edulji: There’s no harm in fighting for your rights

Diana Edulji: There’s no harm in fighting for your rights

She is mercurial, candid, and often, controversial. She is also the greatest Indian woman cricketer of all time. Born into a Parsi family in Mumbai, Diana Edulji was among the first women to play for the national cricket team, and remains the third highest wicket taker in Tests to date. In 2017, she was appointed to the BCCI administration panel by the Supreme Court of India, and has been championing the cause of women’s cricket ever since. Excerpts from her interview.

How did a girl from a Parsi family develop an interest in cricket?
I was always into sports. We stayed in a railway colony, and every Sunday, I played tennis ball cricket with 10 boys. That helped in getting me interested in the game. So when women’s cricket started at the Cricket Club of India (CCI) in 1971, I gave it a try. I thought it was better to make a mark in a new game.

Who were your idols when you started playing?
When I practiced at the CCI, I used to play with Sunil Gavaskar. Bishen Singh Bedi also helped me in my career. He was a left-arm spinner, like me. His tips helped. I was the only girl allowed to bowl to the Indian team and any visiting foreign team in the nets. That’s how my game improved.

How difficult was it for a woman to play cricket at the time?
From 1971 to 1974, it was just net practice, until the Women’s Cricket Association of India was formed in 1974. That’s when the first national took place. Till then, girls faced snide remarks, but we carried on. When international cricket came into India in 1975, we were received well. At Eden Gardens, Kolkata, which hosted the third Test, 25,000 to 30,000 people watched us play.

Did your family support your decision to play cricket?
Very much. My father did insist that basic education be completed though. In fact, my elder sister, Behroze Edulji, also played for India from 1976 to 1981. She was a left-arm medium pacer.

What was your first reaction when you made the national team?
It is prestigious to represent your country in any game. I officially made the team in 1975 when Australia came to India. I went on to play four World Cups. We were the pioneers of women’s cricket in India—Shantha Rangaswamy, Shubhangi Kulkarni, and myself. 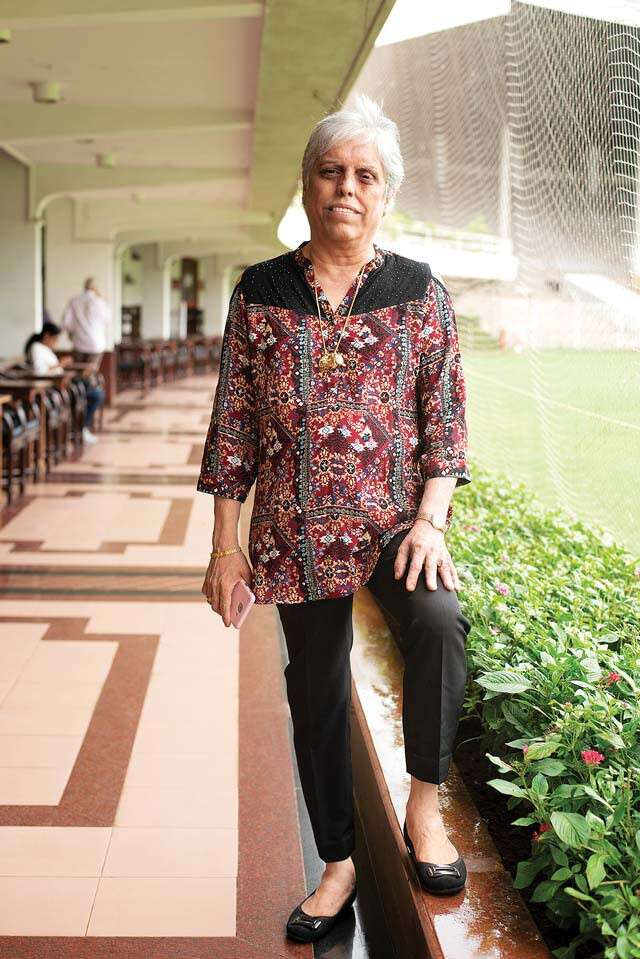 What was it like to be a part of the team’s dressing room?
It was difficult. Language was a problem. The Bombay girls got along more with the South ones because English was a common language. We travelled in unreserved compartments. We slept near the toilets in trains. We’ve roughed it out, but enjoyed ourselves. We had passion and love for the game.

You captained the women’s team during the 1978 World Cup, held in India. What was that like?
It was good to get the captaincy, and an honour to lead the country. Of course, it wasn’t a good outing. There were only four teams in that World Cup. And we were a fledging team, so it was just about participating and getting international experience.

Is there a match that is particularly special to you?
The first Test we won against West Indies in Jamshedpur in 1976. My performance as a bowler was good, and I hit the winning run.

So how did women’s cricket lose its audience?
Earlier, 25,000 to 30,000 people would watch the game in Patna, Jamshedpur, or Kolkata. Women’s cricket was new, and there was no television. The foreigners (except West Indies) played in skirts. So that could have been an attraction (laughs). But the Women’s Cricket Association of India was on a downhill. Except for the national and zonal tournaments, not many competitions were organised for women. Interest went down. There was no media publicity. People started taking interest again only in 2005-06, after the BCCI came in.

Your views on mixed gender cricket.
It’s dangerous, to be frank. I was the one who said it should not happen. See, the word cricket is there. But men’s and women’s cricket are two different games. The women’s IPL, however, could happen. But it’s still in a nascent stage.

There has been talk around the gender pay disparity in cricket.
We cannot compare. At the moment, the revenue is brought in more by the male cricketers. What the women cricketers are getting is substantial. It will improve as the days go by.

What more can be done to focus on women’s cricket?
We need more tournaments. And we need to start at the u-16 level, which we have started this year. Hopefully, we should get some good talent in the domestic circuit. Back in the day, everybody depended on the Railways for a job. Today, the girls are secure with central contracts and match fees. So that will help the girls and their parents in thinking that there is a future in women’s cricket.

You are known to be frank. Does the controversial tag affect you?
I was this way right from day one. If you know what you are doing is right, and you do it with honesty and integrity, there’s no harm in fighting for your rights.